Whether your child is studying the planets or just has an interest in the bigger universe out there, solar system projects are an excellent way to have fun and learn something new at the same time. Craft projects can help kids learn about outer space in a fun way that is hands-on. 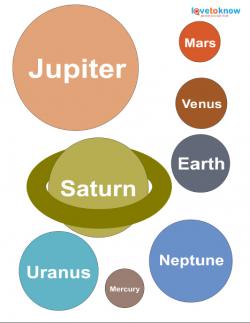 Print out these planets.

Younger children can complete this project with limited supervision, so it's a great choice for grade school aged children. The purpose of this model is to show students how far from the Sun each planet resides.

This model does not include Pluto. You can discuss with your child whether Pluto should be included now that scientists have classified it as a "dwarf planet." Pluto orbits the Sun just like Earth does, but it is so small that it can't clear other objects out of its way.

1. Click on the PDF file to the right and print out the planets.

3. Place the Sun in the middle of your workspace.

The order of the planets circling the Sun will be: 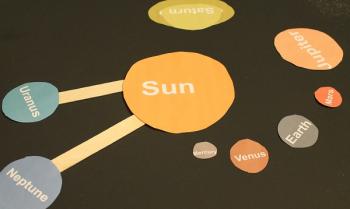 5. Create nine lengths of craft sticks by gluing some together to make longer sticks and cutting others to make shorter ones (an adult should do the cutting here). Allow the glue to dry.

6. Glue the planets to the ends of the craft sticks, starting with the one farthest from the Sun on the longest stick, and continuing on until the closest planet is glued on the end of the shortest stick.

7. Arrange the ends of the sticks under the Sun, moving them in or out. Once you have all the planets arranged so that Mercury is closest to the Sun around to Neptune, which is the farthest, you can glue them into place one at a time.

If you want to make the project more secure, add a cardboard circle the size of the Sun to the back of the Sun, covering the craft stick ends, and glue it in place.

Placemat of the Planets 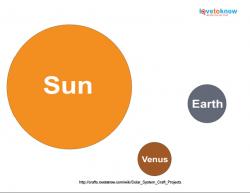 Print planets for this project.

This project allows your child to learn about each planet and reinforces that learning by turning the completed project into a placemat that your child can use at mealtimes.

Allow everything to dry completely and cover with clear contact paper or laminate the finished project to protect it from spills and drips when eating. In the photo below, a small planet with a ring was added to represent Saturn, rays were added to the Sun, Red paint was dabbed on Venus and green and blue paint was added to Earth. Your child can add texture by wiping most of the paint off the brush and then dabbing it onto the planet. Just be careful not to cover the letters, or your child might forget which planet is which. 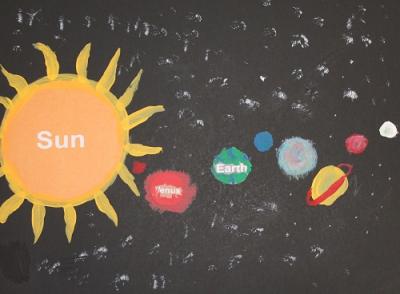 One of the simplest solar system craft projects uses Styrofoam balls and paint to recreate the solar system in miniature form. This type of project can help students picture the distance each planet lives from the Sun. This project is best suited to pre-teens and teens or parents will need to help with wire cutters and bending wire for safety.

Paint your "planets" before putting together the mobile. Suggested colors are as follows:

2. To create a ring for Saturn, place the ball in the center of a piece of cardboard (you can also use cardstock) and draw a circle around it. Create a ring out of that cardboard circle by drawing a second circle an inch in and cutting out the center. The piece of cardboard will now look like a donut. Place the donut over the styrofoam ball until it is in the center of the ball like a ring on a finger. Glue or tape in place. You can paint it a coordinating or contrasting color. You may have to experiment a bit to get the size of the ring just right.

3. Have a parent help cut wire in various lengths with wire cutters, depending on how long you want the mobile to hang. Using a sharp pencil or chopstick, poke a hole through the center of each ball.

4. Thread wire through each ball, bending the end of the wire with pliers to hold the ball in place. Wrap the remaining top portion of the wire around a pencil, then remove the pencil to create a spiral.

5. Attach the balls to the coat hanger, placing the Sun in the middle.

If you would rather create a circular mobile, consider using a round object for the mobile, such as a straw wreath or tin pie plate. Suspend balls around this object, placing the Sun in the middle.

If you can make learning about the solar system fun for your child, you just may start a lifelong love of astronomy. Who knows, your child may be the next scientist to discover a yet unknown planet. Either way he will have fun learning about the planets and will enjoy the finished crafts from these projects.