Creating gum wrapper chains is a fad that started in Canada in the 1960s. However, nearly a half-century later, it is still as popular as ever -- even permitting one man to make it into the Guinness World Records by having the longest chain of gum wrappers to date.

Similar to candy wrapper crafts, creating projects out of gum wrappers is a great way to recycle what otherwise would have been thrown away. This project uses discarded chewing gum wrappers that are folded and linked together to make a chain. No tools or adhesives are needed.

One wrapper makes two links (or four depending on how thick of a chain you want), and it's best to use the outer wrapper of a stick piece of gum rather than an inner foil wrapper or both wrappers together. Smaller wrappers, such as those used with Trident or Ice Breakers Ice Cubes, will not work with this type of gum wrapper project. Typical types of gum wrappers than can be used in a chain include:

Imagine spending 45 years on a single craft with its end result being a project that makes into the record books. That's what happened to Virginia Beach, Virginia, resident Gary Duschl. On March 11, 1965, he began making a chain using only Wrigley chewing gum wrappers. On March 11, 2010, he had created a chain contained 1.5 million gum wrappers (roughly 3 million links).

It was 12 miles long and weighed 882 pounds. It was the length of 211 football fields. Duschl estimated that this project took him 24,000 hours and used about $105,000 worth of gum. His goal is to keep building the chain until it reaches 26.2 miles, the same length as a marathon.

How to Make a Chain From Gum Wrappers

While the idea may seem complex, the craft itself is actually quite simple. Follow these instructions to make a chain out of gum wrappers: 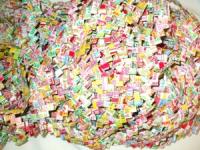 If making a gum wrapper chain sounds a little too boring, there are other crafts you can create:

You can learn more about gum chain wrappers at the following sites: