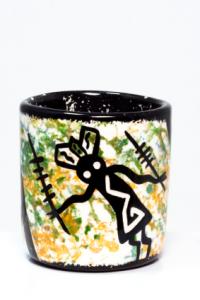 The coil technique for making pottery is the best known process and the method that is most often taught to young art students when they are learning how to make pottery. The coil technique for constructing pottery involves creating a long thin "rope" of clay that is rolled and layered to create the pot. The coils are scored with a small knife, and a mixture of clay and water called slip is applied between each layer to make sure the pot stays together when it is fired.

Native Tech has an illustrated guide to how the coil technique was used by Native Americans. 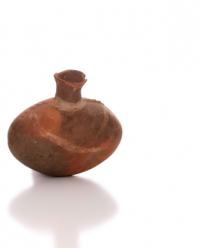 The paddle and anvil technique, used by the Mogollon, involved shaping clay around a rock or other large object. Once the basic shape of the pot was formed, the clay was smoothed with a wooden handle.

The slab technique involved hand forming a pot into the desired shape. As you might expect, results from this technique depend greatly upon the skill of the potter. However, some Native American peoples did combine slab and coil techniques to create their pots. This resulted in more attractive pieces overall. 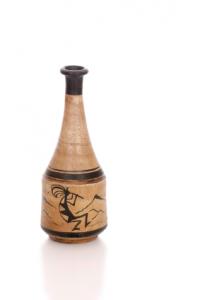 Native American pottery is often decorated with designs that have a special meaning to the artist. The symbols used on pottery might include:

Warpaths2Peacepipes has illustrations of many of the symbols used on Native American pottery, along with explanations of what each symbol means.

Effigy pottery is native American pottery that is in the shape of an actual animal. For example, a bowl might be formed to look like a large duck complete with a tail and beak.

Obviously, Native Americans didn't have access to commercially made glazes for painting their pottery. They created their own paints using natural materials. For example, Pueblo tribes created a black pigment for painting pottery by using boiled wild spinach - a combination of Rocky Mountain bee plant and tansy mustard. Ground minerals from rocks were used to make various red and yellow paints.

If you're a teacher or home schooling parent, The Illinois State Museum offers a downloadable lesson plan for teaching the basics of making Native American pottery to children grades 3-12.